Sing La Pass  trek (4,650 m) is located to the northwest of Kathmandu, to the west of Langtang Himal and east of the Manaslu Himalayan range, stretches between two giant rivers Trishuli and Budhigandai Siver. Sing La pass trekking is one of the awesome trekking trips in Nepal and it is one of the frequently organized trekking trips. The trekking is popular for adventure, as because you will pass through high mountain pass including Sing La Pass and a number of other panoramic view points such as Pagsang Bhanjyang, Jaisal Kunda, Jyamrung etc. from where you will have numerous of majestic mountains above 6,000 meters namely Ganesh Himal (7,406 m), Mt. Langtang (7,300 m), Mt. Annapurna I (8,091 m), Mt. fishtail/Machhapuchre (6,990 m), Mt. Manaslu (8,163 m), to name a few.

Similarly, you will cross numerous of rocks and sloppy hills filled with snow. The trail no doubt is full of dramatic scenes and sceneries and amazing mountain vista, including the blend of culture of diverse ethnic groups namely of Tamang, Hyolmo, Ghale, Gurung, Sherpa to name a few. The region is primarily popular for Tamang culture and their unique rituals and as you pass through the steamy jungle located at the remote areas, you will be able to explore various flora and fauna, for instance, the region is home to over 526 species of plants, including 40 species of orchids, more than 300 species of birds and various endangered animals like Himalayan Thar, Gaur, and musk deer etc.

Sing La Pass trek begins with one day drive from Kathmandu to Gorkha, the historical city and then continues trekking to Doteni, Barpak village, Laprak village Machha Khola, Kashi Gaon, Mangya Bhanjyang, Laba village, Barang, Kharka, GAi Kharka, and finally enter into Gonwa Bhajyang crossing Sing La Pass (4,650 m), throughout the trekking you will have amazing views of of majestic Himalayas such as Ganesh Himal V, Ganesh Himal  II, Langtang Li Rung (7,225 m) and Paldor peak  among others. And after making an excursion all around, you will retrace back to Balche and finally return back to Betrawati and then drive back to Kathmandu. 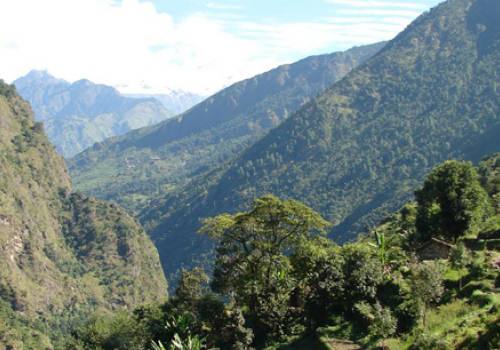